Actors: Toru Iwasu
Born in Osaka Prefecture, and has been an actor for 28 years. Major appearances include “Sono Otoko, Fukushocho”, “Honboshi – Shinri Tokuso Jikenbo”, “The Secret Pleasure of Kyoto People”, “Mito Komon”, “Ooka Echizen”, “Woman of the Crime Lab” series. He has not only appeared in period dramas but also in contemporary series. His special skills are swimming and sword fighting.

How he became an actor: After failing at higher education, he saw the recruitment of the Toei actor training school and received an audition.
Favorite movie, series: “Rocky”, “Abunai Deka”
Favorite artists: Kyohei Shibata, Hashizo Okawa
The most unforgettable scene: He was attacked by a wave while filming the movie “Ask This of Rikyu” in the northern part of Kyoto Prefecture.

At Toei Kyoto Studio Park, he is often in charge of events such as “Terakoya”, “Samurai Course – Sword for Beginners”, the role of Toshizo Hijikata or a Ronin in “Samurai Sword Fighting Lesson”.

This blog is an introduction to the behind-the-scenes of the TV programs and movies shot at TOEI Studios Kyoto and TOEI Kyoto Studio Park.
We will introduce three main themes; the “actors section”, the ”warehouse section”, and the ”technology section”. Thank you.

When we have to choose a costume for an actor, we first have a meeting with him/her or with the

We have countless costumes of various colors shapes and sizes stored in Toei Kyoto Studio Park. They are used even 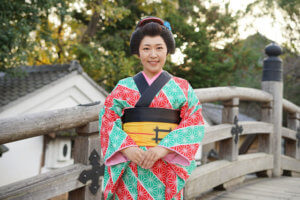 Kobatake was born in Hiroshima, and has been an actress for 14 years. She has appeared in such films as

About Us
Summary of Facilities
The Secrets of the Movie Set

By Train
By Bus
By Car
Parking Hours

The Great Challenges of Shimajiro and the ninjas of Uzumasa
Butt Detective Pupu! Solving Park mysteries